Esports – The Evolution Of Gaming

Esports, if you have not heard of them by now then where on Earth have you been hiding? The wildly entertaining spectator sport has become one of the most popular sports in the whole world. With an audience of hundreds of millions and growing, there is no doubting the popularity of esports any longer.

If you are new to the scene, the terms esports is basically a shortened term for competitive gaming. Esports are played by professional video gamers known as esports athletes. These athletes play their chosen video game/esport on a full time basis and use it as their full time occupation. Every esport scene is highly competitive and takes a great amount of grind and effort to be able to compete in. 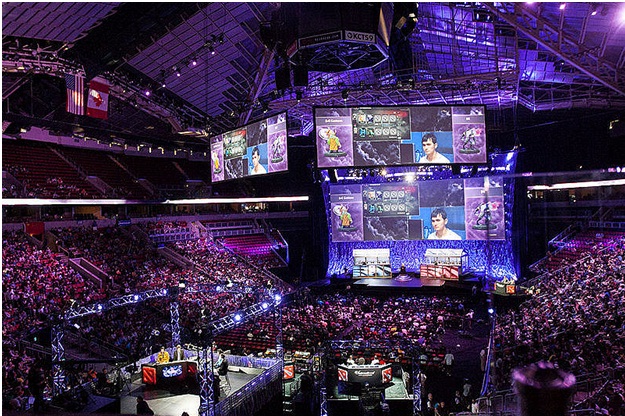 Games you can play

There are numerous games that have a competitive esports scene. Currently, the most popular esports are undoubtedly League of Legends (LoL), Dota 2 and Counter Striker: Global Offensive (CS: GO). Each of these three esports are played on computer, anyone can download and start playing as long as they have a good enough computer and a strong internet connection. The top pros that play the aforementioned games have been competing for many years. The average age of top competitors in esports is 25.2 years old, however, the stand out players usually will have started playing their chosen esport in their mid to late teens. Esports practice for up to eight hours per day, it is not an easy job, it days years of practice and dedication to become the best person in your chosen field no matter what your field is; be it brain surgery or esports athlete.

There are various other games that have their own esports scenes including; FIFA 18, Call of Duty, Rocket League, StarCraft, Hearthstone, Smite and Heroes of the Storm to name but a few. Each of the aforementioned esports scenes attract huge audience numbers on the primary streaming platform for esports – Twitch. Projected viewing figures of esports on Twitch by the year 2020 are expected to reach 385 million whilst esports revenue is predicted to smash through the one-billion-dollar mark. A lot of people within the esports industry are profiting from the huge popularity of the sport; especially the players. The top esports athletes in LoL and Dota 2 have earnings that have sailed way past the $1 million milestone. Indeed, the main event in the LoL calendar – the World Championships has a prize pool well into the millions, any team that wins the tournament will become instant millionaires.

Esports betting also offers fans the opportunity to get in on the action. Esports audiences are now able to place bets on their favourite esports matches and tournaments and with many betting markets yet to come up to speed with the esports betting field, if you know your stuff, there is money to be made. New esports scenes are popping up regularly, one of the newest esports on the market is FIFA 18 which is the only football/soccer game to have an esports scene. The previous installment of FIFA, FIFA 17 handed out rewards of up to $200k for the best of the best FIFA 17 players. The best FIFA players currently are Spencer ‘Gorilla’ Ealing and Corentin ‘RocKy’ Chevrin – both of which earned over $300k between them in the last year alone.

Esports writing has now become a branch of journalism in its own right. Various mainstream sports websites, from ESPN and Sky Sports to Goal.com, have all incorporated their own sections dedicated to esports news. There are now a variety of esports journalists reporting from tournaments and events, the industry is massive and will only continue to grow. Esports events are happening all year round, competitive gaming is now the most modern sport in the world and audiences are lapping it up. The main demographic of esports viewers are millennials of various nationalities. Esports are popular in Asia, Europe and North America, they truly are a global phenomenon and it is no surprise that many businesses are jumping on the back of the esports bandwagon.

Article written by Iain Fenton, a journalist for http://www.comparelotto.com/

Are you a tech nerd and a great writer? I'm currently accepting guest posts. Sounds good?
Get in touch
PrevPreviousHow Can a BEC Attack Lead to Financial Ruin?
NextPersonalize Your Email Lead GenerationNext