Beware the perils of social media 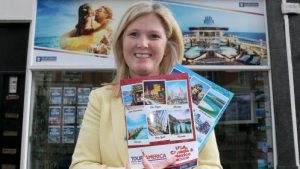 Mary McKenna’s travel business, Tour America, has won numerous awards for its innovative use of social media. For McKenna, it is all about transparency, a way to “facilitate customer stories so that people can see that we provide a good service”. Social media is not a way to sell business to business or business to consumer, but consumer to consumer.

“We have a very strong social media policy for staff that provides clear guidelines about the importance of protecting the reputation of the brand,” she said.

This includes pictures staff might post on their personal social media. “We’ve got a team into digital marketing and social media,” she said. “We see it as a whole new way of doing business and we won’t do anything that would undermine that.”

Irish businesses now have the second highest social media usage in Europe. According to Eurostat, 62% of Irish enterprises used social media in 2015, up from 46% in 2013, and well above the EU average of 36%.

This ranks Ireland second highest in the EU, after Malta at 71%, and well ahead of Europe’s lowest business users of social media, Poland, at 20%.

Yet this apparent strength could be a weakness. According to the most up to date statistics, just 20% of Irish businesses had written guidance outlining acceptable social media usage as recently as 2013.

Such policies should cover a business’s official social networking and staff’s private online activities too. The perils of not clearly adopting such a policy became clear in a recent unfair dismissals case. A restaurant worker posted a picture of himself on Snapchat apparently snorting cocaine while wearing a T-shirt with his employer’s name. His sacking was upheld at the Employment Appeals Tribunal, a decision now under appeal.

“It’s still a stark example of what can happen when personal and professional worlds collide on social media,” said employment law expert Patrick Walshe of Philip Lee, a law firm. “The internet has revolutionised the workplace but there can be as many negatives associated with it as positives.”

According to Walshe, a policy dealing with the use of social media, email and the internet is essential. Without one, an employer will find it much more difficult, and sometimes impossible, to take effective disciplinary action against an employee.

If an employer suddenly decides that it is going to adopt a stricter approach to use of social media, or even a “zero tolerance” approach, the policy will have to be updated to reflect this and employees put on notice of the change.

Policy also has to be applied consistently. If an employee does something particularly stupid on social media, then employers may be tempted to make examples in individual cases. This temptation should be resisted.

Policy has to be applied “objectively and fairly,” said Walshe. “The law isn’t blind to the possibilities of an employer’s reputation being damaged, or the relationship of trust between the parties being irrevocably broken.”

A clear, balanced and well communicated social media policy will do a great deal to vindicate an employer’s position.

“You can’t say an employee breached the company policy if you don’t have one,” said Patricia Callan, director of the Small Firms Association, which offers templates to members.

Policies should cover official corporate and employees’ personal social media accounts. In cases of reputational damage, the courts have treated similar cases differently, depending on the kind of company social media policy that was in place,” said Callan.

As usage grows, new issues emerge. “What happens when a staff member who has built up 5,000 contacts on the company LinkedIn page, leaves the company?” said Callan. “Does he or she get to take them or are they company property, the loss of which would damage its knowledge base?”

Small businesses often don’t commit enough resources to monitoring their profile on social media. “Many are happy to see social media as a way of pushing out content, but don’t see that it is also about listening and responding,” said Krishna De, a social media and online reputation management expert.

The rise of location-based review apps means small businesses now have to cover Instagram and Google+ as well as Facebook and Twitter. “If a person goes into your coffee shop and posts a picture to Instagram of their ‘awful coffee’, anyone searching that location will find that image even if the shop isn’t on Instagram,” she said. “I’ve personally sat in the car park of restaurants looking up reviews on TripAdvisor before going in.”

Copyright owners are increasingly clamping down on the unauthorised use of images and music. Policies should ban the use of material you do not have the right to use, said De.

Make an effort to seek out copyright-free content or risk finding yourself at the receiving end of a hefty bill. “You can’t just pull music off the playlist on your phone to go with the video you’ve created,” she said.

Responsibility for social media should not be the sole preserve of one person. “I’ve seen companies locked out of their own Twitter or Facebook account because the person with the log in passwords has left,” said De. “I’ve also seen people leave a company, retain access to accounts and post negative content. It’s important to make sure more than one person has the passwords and that these are changed regularly.”

Competitions on social media can be a great promotional tool, yet a failure to draw up, and include a link to proper terms and conditions, including such issues as closing dates and age limits, can leave a business vulnerable to legal action.

A company should also make full disclosures if it is benefiting from promoting someone else’s product or service in some way, by getting a commission for directing traffic to a website, for example.

Sponsored social media posts or content, or freebies in return for online plugs should also be disclosed. “The Consumer Protection Act requires by law that any paid for marketing communication be obvious to the consumer,” said Orla Twomey, chief executive of the Advertising Standards Authority.

Social media policy must fit the culture of an organisation, and be consistent with other company policies in place. It must be clearly communicated to staff, kept up to date and general enough to cover future changes in the meantime.

“Who would even have thought of including Snapchat in their policy a few years back?” said De. “Your policy must be broad enough to take account of the fact that new platforms are coming on-stream all the time.”