Britain will become one of the first countries to embrace the next generation of high-speed internet under plans to be announced this week. 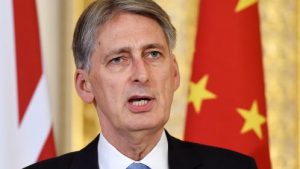 Hundreds of millions of pounds are to be made available to make Britain a pioneer in 5G wireless technology. Experts predict that 5G internet could be up to 100 times faster than 4G connections, sending more data with higher reliability. Feature-length films could be downloaded in seconds.

It would put Britain at the forefront of the “internet of things”, enabling the development of innovations such as driverless cars and smarthomes in which appliances, lighting and heating are controlled remotely using the internet.

Philip Hammond will invite cities tomorrow to place bids to test 5G technology, which is forecast to be in place between 2017 and 2021. The announcement will be a key part of the chancellor’s autumn statement commitment to invest in productive infrastructure.

The trials, which could involve the installation of tens of thousands of 5G transmitters, will be funded with £700 million from a £1.1 billion pot to improve households’ connectivity. Last night it emerged that Bournemouth had been chosen as a 5G pioneer, with Ordnance Survey commissioned to draw up the most detailed digital map of a British town to prepare it for the technological advance.

The map will chart the position of every building, lamppost, shrub and post box to within millimetres, allowing planners to work out where to place the “base stations” required for 5G signals. The study will also take account of transient changes such as whether there are leaves on trees and even the location of Christmas lights. This is vital because the weaker 5G signal can be easily disrupted.

Mr Hammond will also announce that an extra £400 million is to be spent providing up to two million more homes with “full-fibre” broadband connections, which offer ultra-fast downloads. Users could download a Game of Thrones series in less than a minute, the government says.

Officials concede that the upgrades are likely to take place in urban areas which already have broadband networks but ministers will claim that they will release industry resources to improve patchy rural internet connections.

Although the technology behind 5G is still being developed, companies are aiming to bring it to Britain by 2020. Japan, China, and Russia have each committed to piloting the technology, which makes use of available spectrum through a dense network of transmitters. South Korea wants it in place for its Winter Olympics in February 2018.

George Osborne, the former chancellor, made a commitment earlier this year to making Britain a world leader in 5G. In May the National Infrastructure Commission launched a consultation asking industries and local authorities how to ensure that the country is in the vanguard of the new technology.

At the time the commission’s chairman, Lord Adonis, said: “5G has the potential to shape our world in ways that are completely unknowable today. [It] will spur innovations and industries we cannot even imagine.”

A Treasury official said that local authorities would be encouraged to bid for cash to allow trials to take place.

Keegan Wilson, a spokesman for Ordnance Survey, said: “We will be surveying Bournemouth to within an inch of its life.

“The current 4G network won’t be able to cope with the 50 billion connected devices expected to come online in the next few years. Everything from people’s fridges, to watches, to their cups of coffee will be connected up.”

What is 5G?
It is the next generation of mobile internet after 3G and 4G but there is no accepted standard of how fast it will be or how it will work. The consensus is that it will deliver speeds up to 100 times faster than 4G, meaning users could receive speeds of gigabits — rather than megabits — per second and would be able to download two-hour films in seconds.

Nice, but surely not necessary?
Although a good 3G or 4G connection is enough for most people’s needs it is not available everywhere, so a lot of the work will be about building infrastructure. This will become vital as the internet of things, in which devices such as wearable technology and appliances are connected to the web, takes off. It is expected that more than 20 billion devices will be connected by 2020.

When will I get it?
Companies are aiming to bring 5G to the UK from 2020. There will probably be pilot schemes abroad next year and South Korea would like to introduce the technology in time to show off at the Winter Olympics in February 2018.

And what’s full fibre?
It is the existing gold standard of home broadband, as opposed to mobile broadband. Only 2 per cent of UK households have access to the technology, which means you get fibreoptic cables running right up to your premises. Most “fibre” deals run cable to roadside cabinets, so the signal degrades significantly because it uses old-fashioned phone lines to connect the last stretch to your property. Full fibre has the capacity to reach speeds of more than 1Gbps, ten times faster than ordinary fibre, meaning you could download a series of Game of Thrones in under a minute.

Are you a tech nerd and a great writer? I'm currently accepting guest posts. Sounds good?
Get in touch
PrevPreviousSmartphones keeping us up at night
NextChildren of the internet are happy to live a lieNext