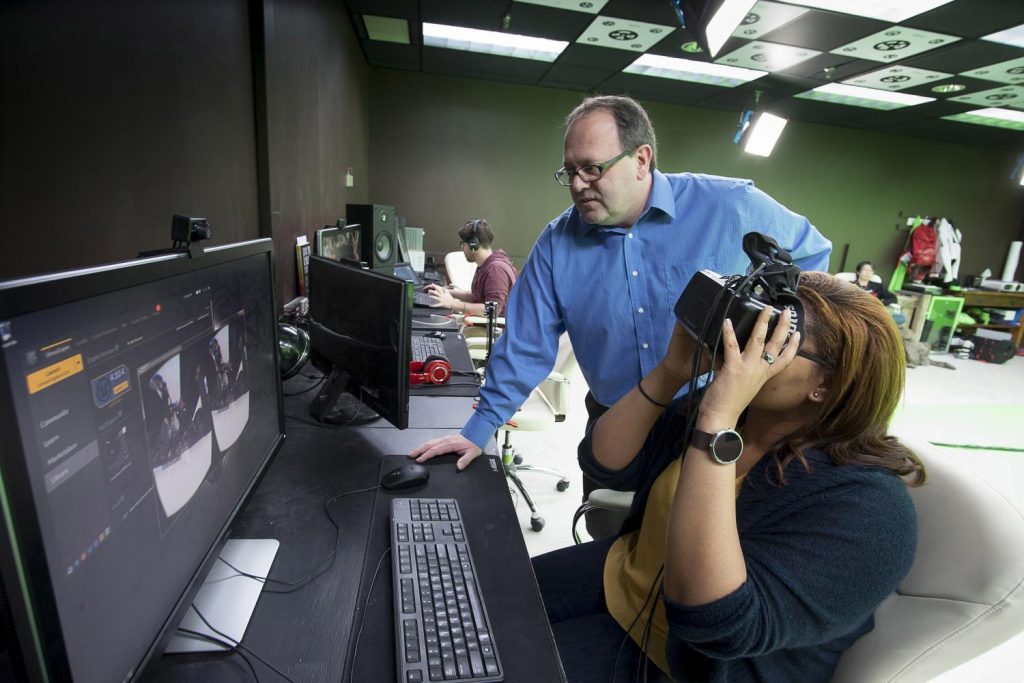 The future is here. Virtual reality technology is not only convincingly immersive and comfortable – it’s on the market for an affordable price. The last few years have seen the emergence of a number of start-ups developing new VR tools that we can use in our daily lives.

Using VR technology as part of the treatment in pain therapy is not a new concept. In 2008, the virtual reality game SnowWorld was designed to help burn victims with pain relief. The game sees players travel through an icy world and shoot snowballs at penguins whilst listening to upbeat music. The game has shown to be successful in reducing pain experienced by burn victims during their treatment. Now, VR developers DeepStream are known as being at the forefront of VR technology for health and medical purposes. Amongst their VR products are games such as ‘Cool!’ which places the user in a tranquil, calming habitat, where they can solve puzzles and explore landscapes. The games help distract patients from their pain, with 60-70% of users reporting a pain alleviation – the effects of which can apparently last up to two days. Whether it be used for mental or physical health, VR technology has clearly shown to be successful in pain therapy, and DeepStream’s games are an example of that.

To most people, the first thing that springs to mind when the term ‘virtual reality’ is mentioned is video games. Video game graphics, gameplay and settings are evolving every day and virtual reality is set to play a huge part in the future of video gaming. Earlier this year, SIlverTV announced a new deal with esports tournament organisers ESL and DreamHack that will see them stream 14 events in virtual reality this year. This means that fans of esports will get to view their favourite esports games in virtual reality. Fans will be able to step into the shoes of esports players but with the enhanced perspective of 360 degree views and other game-changing features.Fans will be able to watch and stream live footage of their favourite esports games from League of Legends and DOTA 2 to CS:GO and FIFA.Silver.tv’s platform is based on a network of virtual cameras that records the full 360-degree range of footage and translates it all into an immersive viewing experience that allows spectators to get much more intimate with the gameplay. They get to enjoy new angles and viewpoints that weren’t possible before — an additional degree of freedom that only cinematic VR can provide.

One of the most useful ways that VR can be used (as far as designers are concerned, at least) is in architectural planning. Usually, architects use 3D modelling programs to help visualize their designs, but there is a limit to how well they can get an insight into how the space will feel when finally constructed. VR technology can help place designers in the middle of their designs prior to constructions, letting them walk around the space and make design changes to the simulated environment in real time. This is what UK-based VRtisan are doing with their VR architectural design experience. “Using their entire body as part of the process, designers can develop both the dimensional and the ergonomic relationships of spaces and elements,” VRtisan explains.

Described as a ‘collective awareness engine’, the new CrowdOptic app combines real time GPS data with live video streaming, allowing others to view a scene from the perspective of whoever is using the app on their phone or smart glasses. Many believe the app can help in emergency situations. For example, firefighters could live stream their work whilst inside a building, reporting back to commanders who will then have a good idea of where the firefighters are – as well as the severity of the fire. CrowdOptic is being eyed by many emergency services and has raised more than $10.7 from investors since launching.

This start-up company is revolutionizing the way that we interact long-distance. AltaspaceVR creates simulated settings in which you can socialize with friends on the other side of the world. Anyone who enters the same setting with their own VR character will be able to interact with you. There are a huge range of settings you can choose between, and plenty of activities in which you can partake in. You could play baseball with strangers or sit in a quaint park feeding the ducks with your long-distance partner. You could attend VR comedy shows, dance classes or cocktail parties – all whilst socializing with real people in a virtual universe.

Evidently, there are countless ways that VR can be used in everyday life to make the world a more efficient and entertaining place. These are just a few of the businesses at the forefront of that movement.

Are you a tech nerd and a great writer? I'm currently accepting guest posts. Sounds good?
Get in touch
PrevPreviousEasy Ways to Find Promotion Codes
NextWhy Is Computing Still Dominated by Men?Next