Cork software supremo is king of his domain

Paying $675,000 for the Teamwork.com name was a sweet move by Peter Coppinger — today his clients include Disney and eBay 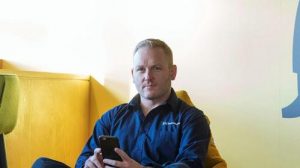 Peter Coppinger has a confession to make. “I’m a terrible chief executive,” he says cheerfully, “I really am. We have made every mistake in the book.” Ensconced on a couch in the “living room” at the snazzy new offices of Teamwork.com, the Cork software company he owns with co-founder Dan Mackey, Coppinger appears to be laying on the incompetence act a bit thick.

There are plans for a first overseas office and a new product to add to its three releases. Coppinger has a more pressing task at hand, though. The office opening is only hours away, with special guest Conor Murray, the Munster and Ireland rugby star.

“Irish people don’t RSVP. We could have 300 [people], we could have 600,” says Coppinger. Then again, the Teamwork invitation did say: “No need to RSVP, just turn up. PS: we have two slides.”

The company also has individual offices for its software developers, a games room, chill-out areas and a terrace with a barbecue, fake grass and an outdoor pool table. The Teamwork values are printed on the wall, ending with a golden rule: “Don’t be a dick.”

Mackey, square-jawed and with a steely handshake, has a life-size Superman statue outside his office. A bookcase doubles as a hidden door to a soundproof room, where developers can code along to loud music.

“We need more beanbags in here,” says Coppinger, who is called Topper by most people and Ted by Mackey. “We call each other Ted for some reason. I can’t remember why.”

The offices cost $2m to kit out, Coppinger confides, but he is confident of attracting top staff. He has a history of big-ticket bets: in 2013, the self-funded company paid $675,000 for the Teamwork.com domain name, variously regarded in tech circles as a stroke of genius or an act of lunacy.

What is indisputable is that the nine-year-old company has grown exponentially. Revenues are at about $14m and Coppinger has set a target of hitting $100m by 2020.

“When we started, we wanted to do well, and not be broke,” he says. “Now we’re doing more than $1m in monthly recurring revenue.”

Growing up in Bantry, west Cork, Coppinger always wanted to be successful. His mother, a single parent, was a nurse, and he has two older sisters.

At the age of eight he got a Commodore 64 computer as a joint Christmas present with his sisters. While they quickly lost interest, Coppinger started typing simple programs from a manual.

“I bought out their shares in the computer,” he says. “One accepted one slice of toast, but the other one held out for three slices.”

By 12, he had a PC and was making shareware games, which he sent to the computer magazine PC Live. It published a demo and told readers to send money to buy the full game.

“I was collecting a couple of hundred pounds a week. I had to explain to my mother that my stupid hobby was literally bringing money in the door.”

Reading a book about Microsoft’s Bill Gates was a seminal moment. “I was fascinated that someone like him could take over the world. I couldn’t wait for school to get out of the way.”

Working part-time at a SuperValu, Coppinger blagged lecture notes from an employee studying computer science. By the time he went to Cork Institute of Technology (CIT) to study computer applications, he had taught himself the C programming language.

“Some guys didn’t know how to turn on the computers. They were only there because their parents wanted them to be.” The upside was he had access to the internet for the first time. “I would print off reams and reams of knowledge about games and programming.”

Coppinger and a second-year student set up Internet Solutions Ireland and went to pubs and nightclubs offering to build them websites. For market research, Coppinger rang a web development company pretending to be a B&B owner looking for a website.

During a pub visit, they found that another company was doing the same thing. That firm was co-owned by Mackey, a first-year student on a different CIT course.

“There was an arms race to get the web business from pubs and clubs. We were mortal enemies,” says Coppinger.

When they met, the pair found they had a lot in common. Together, they set up the Web Society at CIT and designed the student union magazine, for which they were paid in beer. They would hit up the college and the computer department for money to go to web events. “We used to go out on the lash. We didn’t see much of the events. We were the most popular guys in college.”

Coppinger was lured away from college by the chance to be “star programmer” at a web company. “They were promising the sun, moon and stars, £400 a week. In hindsight, they were full of shit.”

The company ran out of funds within months and Coppinger was out of a job. It was too late to join the second year of his course, so he set up a web firm, Digital Crew, in 1999 with a friend, Cormac McCarthy. Mackey joined.

“We thought there was loads of money to be made in web design. We did hundreds of projects: websites, applications, databases, ecommerce sites.”

Along the way they launched CFTagStore, which sold software components to developers and brought in about €100,000 over three years. Coppinger also set up Akari Software, used by colleges to manage their curriculums; and he and Mackey had Area 51, a games internet cafe in Cork city.

The day job was becoming less fun, however. Digital Crew had big-name clients such as Aldi, Lidl and Pfizer, but its owners were broke.

“We thought we would make millions. We didn’t. We were great developers but we were crap businessmen.”

When McCarthy decided to move to Sydney, Coppinger and Mackey were forced to reassess the business. They doubled their prices overnight, and put proper contracts and staged payments in place. All of their clients stayed.

To organise Digital Crew better, the pair researched project management tools to replace their crammed whiteboard. Unimpressed with what was on offer, Coppinger suggested to Mackey they develop their own software.

“He said, ‘Ted, I’ve been thinking the exact same thing.’ We saw there was a gap in the market and we knew we could make a better product. That was the extent of our market research.”

Fridays were dedicated to developing the product, but it quickly took over their evenings and weekends. After using the product at Digital Crew, the pair released it with no fanfare at Teamworkpm.net in October 2007.

“We launched it and went home to bed. We completely failed to market it.”

The pair finally exited Digital Crew in 2010, giving its book of business away for free to Granite Digital, a Cork company. “We knew Teamwork was the rocket ship. We were able to go all-in.”

Companies such as Walt Disney and eBay began using the product to organise and prioritise their projects. Teamwork claims more than 270,000 companies now use its software.

“We can help every business in the world to work better,” says Coppinger. “It takes all the knowledge out of your head and puts it into a system.”

He firmly believes the company was held back in the early years by having “the worst domain name in the world”, however. Efforts to buy the rights to Teamwork.com has been rebuffed by its US owner, who valued it at $10m.

On a night out with his girlfriend in the Bróg pub in Cork in 2013, Coppinger made a $100,000 email offer for the web address. Knocked back again, he asked what price would be acceptable.

Coppinger replied “done”, but was too nervous to tell Mackey and his chief financial officer, Billy Mahony, for two days. It took his “Martin Luther King speech” to get them on board.

“I said, I want us to be a big company and I don’t want to have any regrets. Eventually Dan said, ‘Let’s do it.’”

The $675,000 was nearly all of the company’s cash reserves at the time. “It was the single best business move we ever made,” he says.

Coppinger points to an inflection point in the company growth since then, as it won bigger clients and more valuable deals. Still, his shortcomings as chief executive became clear two years ago when he spent six months in New York personally developing Teamwork.com’s second product.

“When I got back, we hadn’t hired a single person and the company was a mess. All the problems we had were because I wasn’t being the CEO.”

A “knowledge sponge”, Coppinger reads widely and borrows ideas from books such as The Great Game of Business. This year, he adopted an open-book policy, sharing financial figures with the staff and giving them the potential to share in profits.

A staff share option scheme will be put in place next year, and Teamwork.com donates 1% of profits to good causes. After the move to the new office, it is offering its old HQ as free incubation space for start-up companies.

As sole shareholders, Coppinger and Mackey are in full control of the company’s destiny, which could include an IPO. “If I could hire 100 developers in the morning, I would,” he says.

“We’ll blow this up as big as it can be. Business has to be about more than just money — and it’s a lot of fun.”

Working day
I’m a night owl. I get a burst of motivation at 11pm and might still be working at 3am. We have an arrangement to meet for coffee at 8am — I make it about 50% of the time. Monday to Thursday, I’m the chief executive, but I still do programming on Fridays. I have four must-have meetings every week, with key management. I have a treadmill desk, so I do four or five miles an hour all day apart from lunchtime. The days just fly by.

Downtime
I’m big into kayaking — I love the peacefulness of it. We do river runs, where get on the river and just let go. I do a little bit of hill walking — we did Kilimanjaro on our honeymoon. I love to travel, and we have epic holidays. I’m going to New York next week with Dan and Billy, our chief financial officer. It’ll be hamburgers and beers and the Comedy Cellar.

Are you a tech nerd and a great writer? I'm currently accepting guest posts. Sounds good?
Get in touch
PrevPreviousB&B owners threaten to sue Google after bogus review
NextBritain’s Micro Focus buys software arm of US giant in $8.8bn dealNext